Our first order for a selection of the recently released TwoSix 1/144 scale L.1011 Tristar “200” kits has arrived. 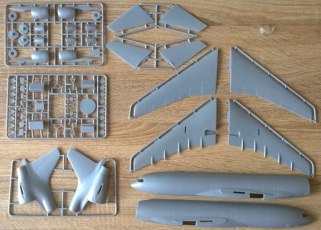 The kit is the Eastern Express kit, packaged with a TwoSix screen printed or laser printed decal.   This Tristar kit is widely believed to have been patterned from the famous 1/144 scale Otaki Tristar kit which is accepted as the most accurate injection moulded styrene plastic 1/144 scale L.1011 kit ever made. It is not, however, a direct copy, and the parts breakdown (for example the rear fuselage  is provided as separate parts) is very different. It lacks locating pins for mating the fuselage halves, wing halves and stab halves, making assembly a little more challenging.

This version of the kit includes what look like the later RB.211-524B engines, with what were often referred to as the “short afterbody” hot section.  Almost all, if not all surviving Tristar 1’s had their RB.211’s upgraded to this version, still being referred to as series 1 unless they were also modified with the extra fuel tanks and other mods that made them series 100, 150 or 250.  The kit does not include the fairing at the base of the #2 engine inlet, which was fitted to all series 200’s.   I would also have to check photo references, as I am not sure if the Air Canada and TWA delivery schemes were worn by Tristars with this engine?

The models I have marked with an * I can confirm from my photo collection are accurate in that the scheme indicated was worn on aircraft fitted with the 524B engine.  Upon request I can exchange the decal for Saudia (Liveries Unlimited), British Airways (Negus or Landor schemes), Court Line (yellow or pink schemes), Gulf Air, LTU Germany, Air Atlanta Icelandic, Air Lanka or Cathay Pacific.

The BraZ resin engines, wheels, and center engine “S” duct are all in stock, and are eminently suitable for use with this kit.