Round 2 LLC is a US based company that now owns the rights and moulds to Hawk, AMT, Lindberg and a few other kit brands that have long since disappeared.  They have recently re-released the Hawk Dh.106 Comet 4 kit as HL512-12. 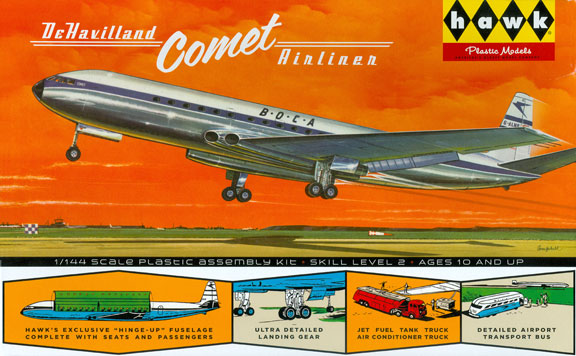 The kit itself is advertised as 1/144 scale, and is moulded in white styrene plastic with a clear cockpit piece.  I’ve not measured it, so cannot comment further on the accuracy of the dimensions.

The kit features a cabin interior, complete with seats and passengers, that can be seen by opening a 4 1/3″ long hatch in the port side of the fuselage.  Also included is a fuel tanker truck, air conditioner trolley, and an airport passenger bus.

It seems to avoid any trademark issues, Round2 made a few deliberate mistakes in the decal artwork and on the box.   It’s not a question of the original decal artists, but rather with British Airways and Mobil.  So, “BOAC” became “BOCA”, Mobilgas became “Mobile gas”, “G-ANLO” became “G-ALNO” and the BOAC “Speedbird” got slightly re-interpreted.

It should be noted that G-ANLO was in fact the only airworthy Comet 3 (a second ground test airframe was built but never flew).   As the Comet 3 and Comet 4 shared the same dimensions, the kit can be used to build either.  The 4B had a longer fuselage and shorter wings.  The 4C combined the longer fuselage of the 4B with the original wings of the 4, and added additional “slipper” fuel tanks extending from the leading edge of the wings.

A useful kit – though other than BOAC, only Aerolineas Argentinas (6) and East African Airways (3) ordered the series 4.  All surviving Comet 4 (and 4B and 4C) airframes were ultimately purchased and operated by Dan Air London (or used for spares).   The Dan Air aircraft flew in their early “white tail” scheme.